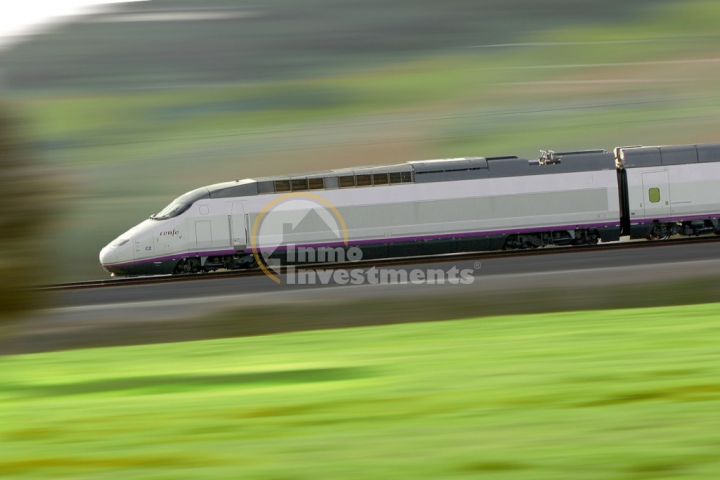 With more than 3,100 km of cutting-edge high-speed rail lines and another 2,200 km due to be completed by 2020, Spain's high-speed rail system is the largest in Europe. Globally, only China has a larger network.

Since 2005 Spain has invested heavily in their rail network, and a web of high-tech high-speed AVE trains (Alta Velocidad Española) weave their way across the Iberian Peninsula daily at nearly 250 kph.

Owned by the Spanish government and operated by state rail carrier RENFE, scheduled return services operate daily from Alicante to Madrid with one-way ticket prices from as little as €32.00.

Fast, safe, and great value: leave Alicante railway station now, and you can be enjoying a coffee in a street cafe in the centre of Madrid in a shade over two hours.

The AVE Mediterranean coast line from Barcelona to Murcia has been under construction since 2011 and is due for completion late 2016/17. Promising even higher speeds with a 350 kph speed safety rating, the new line is expected to reduce travel times between Alicante and Barcelona to just 3 hours.

Meanwhile, RENFE have invested in the latest Italian designed 114 Series super-trains to complement its fleet of bullet-like rolling stock.

With the completion of the Perpignan to Barcelona high-speed line crossing the Pyrennees into France in 2013, RENFE offers a high-speed non-stop direct AVE service from Barcelona to Paris with ticket prices from just €79.00. The French capital can now be reached from Spain by train in under six and a half hours, opening up high-speed overland rail connections throughout Europe.

But with Iberian destinations such as Seville, Malaga, Toledo and Zaragoza all reached with RENFE´s high-speed AVE service from Alicante, exploring all of Spain becomes an exceptionally viable and tantalising proposition.

Promotion of 8 stunning contemporary villas for sale at Daya Vieja. Contemporary detached villas provide models of 3 bedrooms and 3 bathrooms. Modern open plan kitchen and a light and airy lounge/dining room. Outside space boasts a private swimming pool, balcony terrace and the option to add a 72m2 solarium which is perfect for soaking up the sun all year round. The properties are sold with all necessary extras such as pre installed air conditioning, electric blinds, solar panels and white...

Contemporary new build apartments in Villamartin provide 2 or 3 bedroom models and 2 bathrooms. The apartments consist of a light and airy living/dining area and open plan kitchen. Outside space boasts a spacious private solarium, aswell as a large communal garden with swimming pool and jacuzzi. Situated within walking distance to a great selection of amenities such as supermarkets, bars and restaurants, shops, pharmacies and much more. A good choice of blue flag beaches of the Orihuela...

Lovely reformed 1 bedroom apartment located in Conjunto Alfa, Ciudad Quesada, just a short walk from a variety of shops and restaurants, as well as being a 15-20 minute walk from the Quesada high street.The apartment offers an open plan living/dining room area and kitchen, with an archway that leads through into a large bedroom and a modern bathroom. 2 sets of patio doors, one from the bedroom and the other from the living area, lead out onto a double terrace, one glazed in with sliding...

"Villa Cornical" for sale at Torre Golf , Murcia. This well located semi detached villa offers 86m2 of living space over 2 floors. The ground floor offers double bedroom, bathroom, lounge/dining room and kitchen and the first floor boasts master bedroom and bathroom with sun terrace for year round sun and stunning views over the golf course and community. The property comprises porch, terrace with on-site parking and garden. Situated on La Torre Golf resort in Murcia, At the very centre...

Extensive and super spacious detached villa for sale located in the quiet and peaceful residential community of Montemar, Algorfa. The villa offers an impressive 273m2 of living space and comprises 5 bedrooms, 3 bathrooms, with the master bedroom boasting en-suite bathroom with access to the main terrace on the first floor and which boasts stunning panoramic views over the countryside, very spacious lounge with adjoining raised dining area and separate fuly fitted, modern kitchen,...

An extensive detached villa for sale in Cabo Roig occupying a prestigious location. This substantial luxury property offers a total of 5 bedrooms (4 en-suite) and 5 bathrooms, a modern semi-independent fully fitted kitchen, a bright and airy living room with feature fireplace and patio doors to the garden. Outside space boasts several terraces, balconies, and an interior staircase leads to an impressive rooftop solarium offering extra space, year round sun, and panoramic views of the...

New build villa in Orba provides a modern design situated on an impressive 600m2 plot , featuring 2 bedrooms, 1 full bathroom and a contemporary living/dining area with an open plan kitchen. Outside space boasts a spacious garden with terraces for al fresco dining, a 4x8m private swimming pool and onsite parking. The property is tailored to suit you and certain materials can be chosen to make the property suitable for your needs. The villa is sold with necessary extras such as air...