News: The Twelve Grapes of Luck, welcoming the new year 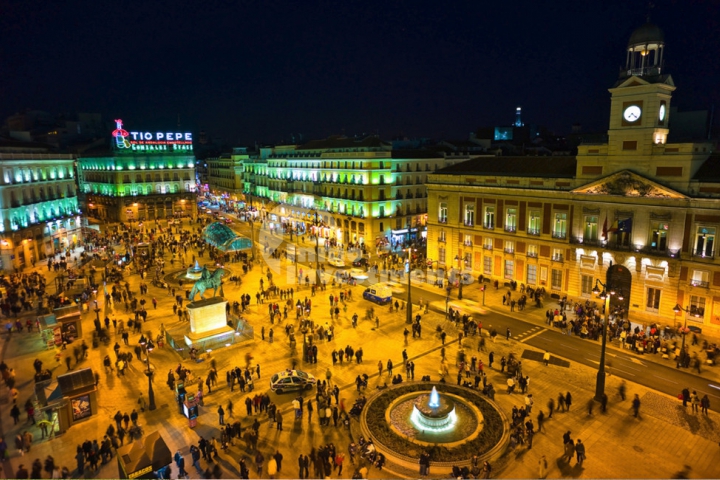 The Twelve Grapes of Luck
Welcoming the new year 2018

Throughout the Iberian peninsular this evening, 2018 will be welcomed with a fruity Spanish tradition involving a dozen berries.

Since the early 20th century, The Twelve Grapes of Luck (Las Doce Uvas de La Suerte) has been a consistent companion to new year celebration across Spain.

Originally established in the late 19th century, in 1909 some particularly inventive Alicante vintners vested the little known practice in to popular Spanish culture, keen to capitalise on a particulary good annual harvest of grapes.

The custom consists of eating one grape with each bell strike of the clock tower at midnight on the last day of the year.

It is believed that following the time-honoured custom brings prosperity and good fortune for the forthcoming new year.

The Twelve Grapes of Luck: celebrating new year in Spain

Traditionally the ritual was considered a means to deter witches and bad spirits, but in the new millenium it is viewed as a cultural formality that welcomes in the new year in Spain.

The Twelve Grapes of Luck are usually eaten with family or friends after the new years eve dinner, or at gatherings in squares around Spain in close proximity to bell towers.

Each year since 1962, the new year is brought in at the Puerta del Sol public square in the capital city of Madrid, with the ringing of the famous clock tower bells broadcast on television nationwide.

« New build property guarantees and home warranties in Spain Next
How long does it take to sell a property in Spain? » Previous

Well located detached villa with separate underbuild (currently serving as a family business) in Los Balcones . The villa for sale offers family living space over 1 level and offers 4 bedrooms, 3 bathrooms, (master bedroom with en-suite) large living room of approximately 56m2 with accessed to the riased terrace overlooking the pool and gardens, fully fitted kitchen with extended dining area. Under the property there is a separate apartment, which is currently being used by the present...

Built in 2005, this imposing and extensive villa in Los Balcones offers an impressive 204m2 of living space and is set on an ample 410m2 plot. The villa offers 6 bedrooms, 3 bathrooms, large lounge/dining room , seperate kitchen and garage. Outside space boasts garden, sizeable terrace and private swimming pool. Sold fully furnished and equipped. Located in Los Balcones and walking distance to local amenities, a minutes drive to the Torrevieja hospital and under 4km into the heart of...

Extensive detached villa for sale in Los Balcones . The villa offers 220 m2 of living space and is set on an impressive 1000m2 plot. Comprising in the main living area 2 bedrooms both with en-suite bathrooms, large living room with gas fireplace, separate dining area adjoining the American style kitchen and glazed sun terrace for taking advantage of the winter sun. The property also boast basement with additional bedroom and bathroom, ideal for extended family, friends or guests. The...

Villa for sale in Los Balcones, located on the outskirts of Torrevieja, with a surface of 150m2 divided in 2 floors. The property has a large living room with a fireplace, kitchen, 3 bedrooms, 3 baths and solarium. It also includes a garden with a private pool and garage.The property is only a few minutes drive from the Centre of Torrevieja. It is residential area where to enjoy the Mediterranean climate and the Blue Flag beaches of Orihuela Costa and Torrevieja and La Mata, Playa Flamenca,...

Detached villa for sale located in Los Balcones . The property has 2/3 bedrooms one of the bedrooms is currently used by the owner as a dining room but can be reverted back to a bedroom if you so wish. On the ground floor you have a bright good size living room with a separate dining area (third bedroom), double bedroom and bathroom, American kitchen and a back door that leads to a large patio area with a brick built BBQ. Upstairs comprises the master double bedroom with an en-suite...

Beautiful semi-detached villa for sale completely renovated with private pool and spectacular views in Los Balcones . The villa offers 5 bedrooms, 3 bathrooms, lounge/dining room and kitchen. Set on a stunning plot of 500m2 with low maintenance terraces and private swimming pool. Totally renovated and in great condition and offering an excellent price. Located close to the park area and all local amenities. 3km to a number of beaches on the Orihuela Costa and Torrevieja centre....